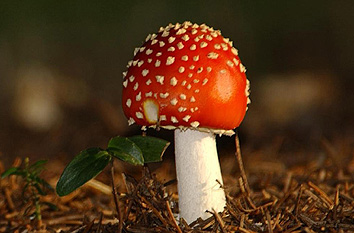 That's Sci-Fi talk for mushroom hunters. Every state in the US has a local organization that scowers for edible mushrooms. You might be surprised to discover that Utah has some of the best edible wild mushroom crops in the world.

Including Chantrelles, a delightful delicacy with the aroma of apricots. They taste more like a flower than a mushroom. They're absolutely delectable!

Even the chefs at Café des Artistes, in Manhattan, rely on crazy mushroom people who forage mixed woods and crawl under conifers and oaks to find this tasty 'shroom. That's because Chantrelles refuse to grow in a commercial environment.

Before you pull on your boots and head to the woods, keep in mind that Chantrelle hunting is not as easy as it sounds. These mushrooms look similar to the Jack O'Lantern (Omphalotus illudens) and the False Chanterelle (Hygrophoropsis aurantiaca,) both of which are poisonous.

Edible mushrooms commonly found in Utah:
And, they're good for you, too. High in potassium, riboflavin, niacin, and selenium. In fact, mushrooms are the best food you can eat to guard against prostate cancer.

* Do not, under circumstances, eat a wild mushroom unless it has been officially identified as an edible species.

** Do not, under any circumstances, believe your significant other when she says she 'knows' these mushrooms are okay. Remember Arsenic and Old Lace?

Surprise, surprise, Black Moon knows his stuff. He wrote in, commenting about the cute little red mushroom in the top photo. The Amanita muscaria, the Fly Agaric has a sordid past, used by the Vikings prior to battle. It's loaded with toxins that can make you crazy and violently ill... But, that's not why I chose it. The Fly Agaric has been associated with Christmas ornaments and other holiday decor since 1652.

Posted by Kate/High Altitude Gardening at 2:23 AM

I agree exotic mushrooms are delightful; but of all the mushrooms, in all the world, you had to picture the Fly Agaric!? It's what the Beserkers used to eat before battle; (hence the term 'beserk') -Blackmoon