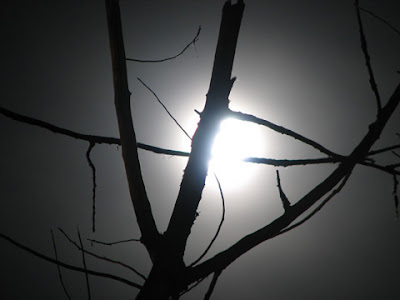 Scientists swear there is no truth to the idea that a full moon makes people nuts. I have always wondered just how much empirical evidence they need. Fights at work, people on edge, dogs and cats acting strange... First one friend calls, victim of a heartache, the following day another friend is dealing with the same darn thing. Lovers are dropping like flies during this particularly mean moon. Which is one reason why I'm laying low...

My neighbor talks to me of moons. They have names; I didn't know that. For instance, April is the Pink Moon. The last one was the Hunger Moon.

This one is the Worm Moon. Hiking underneath it, I think I know why. Worms like the dark and this one casts a poor light.

In winter, we take a snowshoe hike in the brilliant brightness of each full moon. Some nights, it's a riotous good time. Other times, it's a night when we need the companionship of others, but not the conversation. Heather is feeling lost and I have no good words to offer when life begins to unravel.

But, I know a place up there I haven't told anybody about. Not even her. A long, flat rock that doubles as a dining room table. I brought a big 'ole bottle of wine and we came pretty close to solving all the problems of the world.

Did you know?
Plants respond to the same gravitational pull of tides that affect the oceans. Just as the moon pulls the tides in the oceans, it also pulls the subtle bodies of water. Scientists may argue about it's effect on us but tests have proven seeds will absorb the most water at the time of the full moon - and germinate faster during this time in the lunar cycle.
Posted by Kate/High Altitude Gardening at 11:40 PM