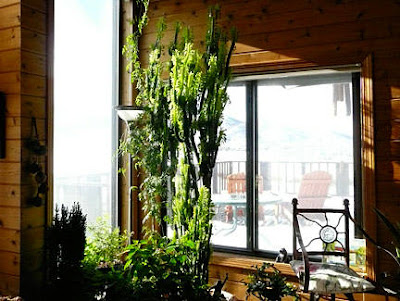 Tall, green & handsome! 10 foot tall Uncle Henry is at it again.
I donned my heaviest jacket and a sturdy pair of boots. Then I pulled on some seriously protective leather gloves. Because today was the day... to take Uncle Henry for a walk.

He's a spiny old fella who's discovered his second childhood. I conducted a bit of liposuction on him this year, removing about 50 pounds of tall, prickly branches.

Henry is an African Milk Tree. The old geezer started out as one of those tiny, dollar cactus plants ~ now he's about 10 feet tall. Every holiday, I kick him out of his sunny window, making a place for the Christmas tree. Today, he's back in his favorite hot spot.

The name 'milk tree' comes from the really nasty white sap that runs from his stems when you give him a haircut. Don't - whatever you do - rub your eyes or get that stuff on your skin. It's mighty painful.

According to West African folklore, sharing a slice of Uncle Henry brings both parties good luck. So, I've been trying to give him away forever, but everybody says no. Which hurts my feelings and Henry's, too. He's not that ugly...

* Euphorbia trigona African Milk Tree: water every week or so. To propagate, place a cut stem into the soil, skip the watering for a week and he'll grow an entirely new plant.
Posted by Kate/High Altitude Gardening at 10:41 AM

Aw, I don't think Uncle Henry's ugly. One of these decades I actually will carry off one of his offshoots to see if it's as happy in my greenhouse as in your bay window.

Your indoor milk tree reminds me of the Chicago saguaro growing down the alley from our 1st house. Twas growing in a greenhouse at the back of the lot & every couple of years, the owner had to dig it up to lower the hole that it occupied so that it didn't poke a hole through the roof of the greenhouse (and suffer an ignominious Chicago death from freezing.)

Hi, Granny: Henry was doing the same thing at our last house. He's pretty happy with the new, taller ceilings. :)

Jane, I'll bring you a cutting the next time I'm in town. :)

I would have taken a cutting. I think he's rather debonaire.