It didn't take long. Maybe an hour or two. By the time it was over, I learned I'd used the wrong mulch, ordered from the wrong bulb company, purchased a garden ornament from the wrong country, even the tile project was suddenly all wrong.

Here I sit, polarized, wondering what to do. Finish what I started? Or, quit while I'm ahead?

Mostly I wonder what it is about me that gives others the impression I have a single digit IQ. It's as if people can't help themselves. They take one look at my blonde hair and hand me mountains and mountains of advice. The problem is... it generally stops me dead in my tracks. It's hard to move forward when you lose confidence in yourself.

I'm beginning to suspect that too much advice is worse than none at all. At least when I didn't know any better, I was making steady progress. Take last summer, for instance, when I decided to paint my house myself. People went off their rocker over that idea. I was so exasperated, I put the project on hold 'til the commotion settled down. And, guess what. My house is still not painted. 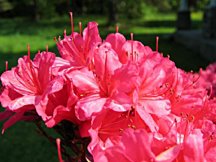 Maybe the difference between me and other people is that I don't really mind making mistakes. If nothing else, they're good for a chuckle. Plus, not everything turns out badly. When I'm successful, by my own doing, I feel fantastic. When I'm successful because I followed directions, I don't feel nearly so elated. Maybe that should hold true for lots of things - especially gardening. It's just a plant, after all. If it dies, by another one! Chances are, it wasn't your fault anyway.

* Take this Azalea, for instance. I planted it before I learned they don't grow here. It needs TLC but it's doing just fine. Sometimes it's fun to ignore the experts and learn new tricks all on your own.

The only real mistake is the one from which we learn nothing.
— John Powell
Posted by Kate/High Altitude Gardening at 1:25 AM

When I'm successful because I followed directions, I don't feel nearly so elated.

I'm totally with you on that...although, like with my packets of lettuce seed, occasionally following the directions is a good thing. But I agree -- as someone who is learning a lot from (and laughing hard at) her mistakes, it's been a lot more fun to do this by the seat of my pants than by the book.